Sweet Honeysuckle: Faithful Friend or Scourge of the Country? 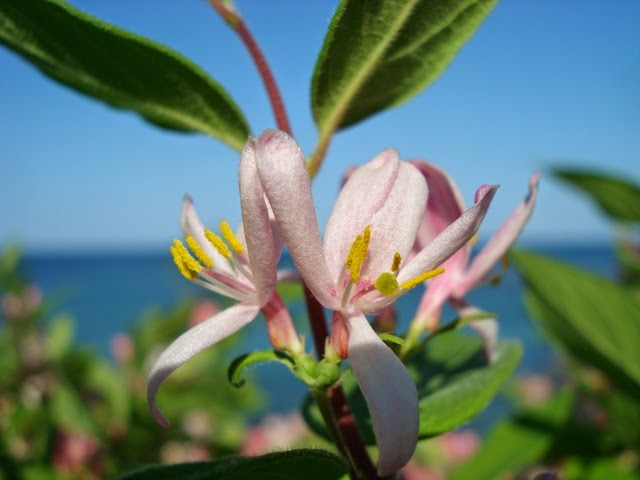 “…how sweetly smells the honeysuckle in the hush’d night…”

Just inhaling the fragrance of Honeysuckle on a warm evening breeze is enough to make anyone pause and seek the source of her sweet cologne. Oh, there… that overgrown vine enveloping the hedge that your eyes always skip over on their way to a more pressing engagement, that’s where that heavenly aroma is coming from… the Honeysuckle. Beloved by bees and hummingbirds alike, this tenacious climbing plant boasts creamy white and yellow, or sometimes pink, two-lipped flowers in pairs. These delicate blossoms measuring one to two inches long, offer a sweet nectar making her very poplar with the wee winged ones.

Not long ago, when most people were still fairly attuned to nature, it was commonly noted that her flowers resembled lovers entwined, thereby making “Love Bind,” as she was sometimes called, a symbol of devotion and love. In Victorian times, it was said that if one brought a Honeysuckle bouquet into the house, a wedding would follow within the year. Prudence being the operative theme in those days, perhaps marriage was the only possible option for release of wanton desires, for it was well-known that the perfume that spills from her honey-lipped blossoms would spark dreams of passion and desire.

“The trumpet flower whose ivory bugles blow scent instead of sound.”  -Pepys

Look at the way her trailing vines twist around each other as they reach new heights in their quest for sunshine. The interlacing vines certainly do bring to mind an intimate embrace, but as we all learn at one point or another, clinging is not necessarily the most sought after characteristic in a person or a plant. Fidelity and devotion is one thing certainly, but it is this very quality gone to the extreme of suffocation that has made Honeysuckle an invasive scourge in most parts of the country.

Lonicera is a genus of plants from the family Caprifoliacae, of which the Elder is another well-known member. The name lets us know that goats like to eat the leaves- think “foliage” and “Capricorn”- and goats aren’t the only ones who enjoy browsing on the tender tips; the Honeysuckle is a major food source for the white-tailed deer. Over 100 of the approximately one hundred eighty species of Lonicera originated in Asia, the species used mostly in herbal medicine is L. japonica. The Honeysuckle is listed as a USDA National Invasive Species; it grows quickly, doesn’t succumb easily to pests or diseases and has a grip that can strangle a small sapling.

Honeysuckle propagates by seed or by the nodes on its trailing runners; these root runners can explore the area up to ten feet from the main plant and root down to depths of 4 feet. The seeds are generously scattered by the birds who enjoy the bright clusters of fleshy red (or occasionally black) berries and add a bit of fertilizer as they distribute them. The berries are not edible to humans, in fact, except for one elongated bell-shaped blue variety (L. caerulea), the fruit of the Honeysuckle is slightly toxic to people.

The berry is not the medicinal part of the Honeysuckle; it is the young flower buds and the stems that contain the properties used to ward off disease. In fact, well-known herbalist Michael Tierra calls Lonicera the “Echinacea of Traditional Chinese Medicine.” According to medical traditions dating back thousands of years, Jin Yin Hua, literally “gold-silver flower,” is powerfully effective for the treatment of hot purulent infections. In TCM, Honeysuckle belongs to a class of remedies that Clear Heat Toxicity; in other words, the aspect of pathogens or infectious disease that makes one physically sick. Examples of Heat Toxicity can include swellings or inflamed eruptions with fever and malaise, dysentery, abscesses, encephalitis, appendicitis and the like.

Lonicera is anti-inflammatory, and anti-infectious, particularly suited to treating issues of the throat, eyes, skin, breast and intestines. For sore throats, headaches and conjunctivitis, Lonicera has been shown to be highly effective at providing relief, and for the early stages of contagious diseases it is often taken in a formula called Yin Chiao Chieh Tu Pien (pronounced “yin chow chee dew peein”). Cheap “patent formulas” are often available at Asian grocery stores or online, but often contain pharmaceutical agents that aren’t listed on the label. There is very little, if any, regulation when it comes to retail products from China (as we have sadly learned), so be sure to get your Yin Chiao from a trusted source. Excellent and safe brands that are regulated by strict US codes for safe manufacturing and handling are available, usually though a credentialed herbalist. For myself and a great number of my patients, we can’t get through a winter without the help of our legendary Yin Chiao!

This renowned formula contains a combination of antibacterial and antiviral herbs, the most noteworthy of which is Forsythia fruit, and is indicated for the onset of severe colds and flu-like symptoms including sore throat, headaches, fever and possible chills. It is a very balanced prescription that addresses the infectious nature of the pathogen while keeping the body harmonized. It has been taken for upper respiratory infections, flu, acute bronchitis, measles and even for early stages of encephalitis and meningitis. Because it is an energetically cooling formula specific for virulent Heat-type symptoms, it is ineffective for colds with profuse, clear, watery mucous accompanied by a pronounced chilly feeling.

In laboratory trials, Lonicera has been shown to inhibit the growth of various pathogens in vitro such as streptococcus pneumonia, the two most prevalent anti-biotic resistant hospital infections, staphylococcus and pseudomonas, as well as being especially effective against salmonella. Other studies have confirmed that its use against tuberculosis is particularly warranted. It is antiviral against several strains of influenza, and is used in ophthalmology for corneal ulcers, keratitis and conjunctivitis. Honeysuckle has even been shown to lower cholesterol in lab studies, making it a possible alternative treatment for balancing lipid metabolism.

As if that weren’t enough, in Europe Lonicera is used to treat urinary problems (it is also diuretic), as well as asthma and to ease the discomfort of childbirth. In Japan, it is frequently included in products taken for the treatment of bloating, nausea, vomiting and even Hepatitis C. Recent research is investigating its use in the treatment of breast cancer and for the clinical suppression of AIDS. It is a mild herb that is safe for children and elderly alike, but it is not recommended if there is chronic diarrhea. Generally it’s the flower buds that are used medicinally, gathered May through June early in the morning before they open- mind the bees! Soothing syrups can be made from these sugary buds, or add the open blossoms to salads for some added charm. The tender stems gathered in autumn or winter, are also used in herbal medicine for the treatment of joint pain with inflammation or for sores and abscesses; in Pinyin it is called Ren Dong Teng, literally “stem that resists winter.”

If the stem resists winter, then it’s no surprise that folklore once touted Honeysuckle’s ability to resist evil, especially on Mayday. Planted in the garden, it was supposed to protect the home and property from malevolent spirits. Modern practitioners using flower essences hold Honeysuckle in high esteem for its ability to attract wealth; the characteristics of the vine also represent ascension in the quest to find one’s highest self.

Our highest self is reflected in our integrity and our peaceful bliss which comes when we are able to release our grip on the past and the illusion of safety when we clutch tightly to what no longer serves our highest potential. Honeysuckle energetically can help us to have the courage to accept struggles with grace and ease and move forward with purpose. So take advantage of the plethora of wild Honeysuckle; harvest and dry some buds for the next flu season, toss a few flowers in with some greens, or bring a fragrant bouquet home to enjoy… just remember that it could mean a wedding in your future!

Lisl Meredith Huebner, Dipl.CH, RH
Diplomate Chinese Herbology (NCCAOM), Registered Herbalist (AHG)
”Herbalisl” is a nationally board certified Chinese Herbalist with the National Certification Commission for Acupuncture and Oriental Medicine, and a Registered Herbalist with the American Herbalists Guild. Lisl is also a certified Medicinal Aromatherapist, a level III Reiki practitioner, an Acupressurist, an Auriculotherapist, a plant photographer, a renowned diagnostician, a teacher of Herbal Medicine and Medicinal Aromatherapy and a published writer in private practice for over a decade. She is available by appointment.
www.HerbaLisl.com


Please call 8 6 0 - 4 8 0 - 0 1 1 5 or email HerbaLisl@hotmail.com if you have any questions,
would like to schedule an appointment, attend meditations, weed walks,
or are interested in taking classes.
Posted by Herbalisl at 4:02 PM