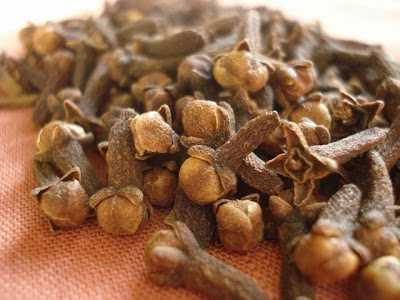 Clove, a commonly known and easily recognized spice is the dried, unopened flower bud of an evergreen tree from the Myrtle (Myrtaceae) family that is native to Indonesia and grown throughout the Middle East. The tree must be at least five years old before it produces the bright pinkish-red flower buds, which are carefully hand-harvested and dried. When one considers the insubstantial weight of a flower bud, it is impressive to consider that a mature tree can produce up to forty pounds of flower buds in a single harvest! Talk about abundance!!

Like all aromatic herbs and spices, Clove has a long and rich history as an ally of humanity. Originally found on the “Spice Islands” of Indonesia, the indigenous people there once planted the tree to venerate the birth of their children. Each soul was then linked to the health and longevity of the Clove tree, in this way the tree was an honored member of their community. In the 1600’s, the Dutch seized control over the spice trade and began to burn down clove trees that were out of their sphere of direct command; imagine the devastation of discovering that the sacred tree that was linked to your spirit, or that of a loved one had been unceremoniously burned to the ground.


At this time in history, Cloves were worth their weight in gold; the high value placed on the spice was ample temptation for greedy traders to disregard all but their own monetary advantage. However, the trees were eventually so widely planted during the 1800’s by the British that the price came down and Cloves became commonly available. Today, the fact that we can easily obtain an abundance of Clove Bud is testament to the widespread wealth that many westerners enjoy on a regular basis.

The name is derived from the Latin “clavus” which means nail, of which the whole spice bears a striking similarity. The intense flavor of Cloves is as distinct and precise as its namesake and is used in small amounts to enhance cuisines throughout the world. In Mexico, the sweet, hot flavor of “clavos de olor” is blended with cumin, cinnamon and other exotic spices in Abuela’s secret molé recipe. In Germany, Christmas wouldn’t be the same without Cloves for the pfeffernuesse, and the Dutch speculaas and the Greek kourambiedes cookies wouldn’t have the same appeal either.

In France, it is traditional for some cooks to stud an onion with a clove or two and add it to a simmering stock. Of course we can all relate to the holiday ham bedazzled with Cloves and where would pumpkin pie be without Clove’s distinctive pizzazz? Cloves are integral in Indian curries, Chinese five spice blend, mulling and pickling spices and is a surprising ingredient in Worcestershire sauce. Cloves are best enjoyed in the autumn and winter; the energetic coziness of this toasty spice brings thermal heat to the core of our body, thereby cooling the surface and harmonizing with colder temperatures.

Medicinally, Cloves have a myriad of uses and has been incorporated in traditional medicines for thousands of years. In Traditional Chinese Medicine, ding xiang is used as a carminative, especially for Cold-type digestion characterized by nausea, vomiting, and/or diarrhea, with cold extremities and pallor. In the same way, its spiciness can transform a cold deep in the chest with an unproductive cough, so long as the mucous is white or clear and there is no fever or signs of heat. Sometimes it is used for morning sickness when combined with ginseng and patchouli; this combination concurrently warms the center, aromatically transforms damp-heavy congestion and nourishes the body.

Cloves are antibacterial, antiviral, antifungal, and antiseptic; in West Africa they are called Ogun Jedi-jedi, and traditionally have worked quite effectively in the treatment of scabies, cholera, tuberculosis, and malaria. As a vermifuge, cloves -having the added benefit of promoting peristalsis- can be combined with walnut hulls, various Artemesias and other herbs during a case-specific parasite-purge regimen.

Current scientific studies indicate that cloves may help inhibit the herpes virus and shingles. Some practitioners are now incorporating the use of Clove in the treatment of diabetes, as early scientific data suggests that the herb may reduce blood sugar. Some cautions should be taken when working with Clove bud; because it thins the blood, it is contraindicated with blood thinning medications and prior to surgery. Due to its powerfully warming nature, it is not to be given to people with inflammation, or other signs of internal heat. There is some concern about the potential poisonous properties of this pungent prescription, but its toxicity is very low, one would need to consume about a ½ lb of Clove in order to get a lethal dose.

As an aphrodisiac, cloves can stimulate the fire of passion; putting a few drops in a small amount of carrier oil and then sharing the pleasure of massaging this romantic oil on your partner can enhance ardor and excitement. The mildly numbing oil can also be diluted a bit more and applied in small amounts to overly sensitive areas in order to dull amorous sensations and prolong intimate encounters. One old folk remedy for headaches calls for Cloves combined with milk and salt to be applied to the temples, so if your partner is willing, this spicy friend can even take care of “Not tonight, Honey.”

Clove’s numbing effect was once considered an invaluable asset in dentistry before Novocain was commonly used. Clove oil continues to be helpful for toothaches and gum abscess, and due to its efficacy is still very popular for treating dry socket. A rubifacient, Clove can help stimulate circulation of blood, not just to heal problems with the teeth and gums, but also as a helpful addition to liniments for traumatic injury, healing salves for sores, and muscle rubs for cramps, aches and spasms. 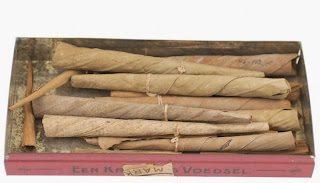 The spicy fragrance of Cloves is a desirable commodity even beyond the scope of food and medicine. Cloves, blended with up to 80% tobacco, are smoked in cigarettes called “kretak” in Indonesia. Clove cigarettes, increasingly popular in the west, were recently banned in the U.S., but a loophole currently allows them to be sold as “filtered clove cigars.” The smooth and warmly scented smoke is an even lovelier element in much of the incense burned for religious offerings throughout Asia. Other uses for the spice are even more diverse; Japanese katana swords are polished with mineral oil enhanced by a drop of clove oil. In oil paintings, a tiny bit is used to prevent oxidation of seed oils in the paint during drying.

Pomanders are a popular holiday craft these days but were once used to ward off insects and disease, or to mask unpleasant odors. This simple bit of folk art makes a festive decoration and a cheerful homemade gift.

If you wish to hang your pomander, apply masking tape around the fruit where you will tie the ribbon later. Carefully pierce fruit with skewer in a pattern that pleases you, keeping each hole about 1/8-1/4 inch apart; the fruit will shrink as it dries and the holes will get smaller and closer together. Insert Clove buds into each hole, being careful not to crush the delicate crown. Gently roll each decorated fruit in the spice mixture to help preserve it, leave in a dry area and allow it to desiccate. Once it dries, you can tie it with ribbon; if mold forms, compost the pomander, and chalk it up to a learning experience!

Valuable and useful on so many levels, Clove bud naturally has a message not just for the body, but for the soul and the mind. The shape of a Clove bud may remind us of our brainstem; its piquant aroma and fiery flavor seems to pierce our very consciousness, sharpening our collective memories. As we breathe in its penetrating warmth, its heat spreads through our chest, infusing our heart with tenderness and compassion. From this heart-centered perspective we may then C-LOVE as it exists all around us and allow this abundance and generosity to flow through us to our community. The wealth of cloves available to us is without a doubt something to savor and appreciate as a symbol of great prosperity, health, endurance and of course, Love. 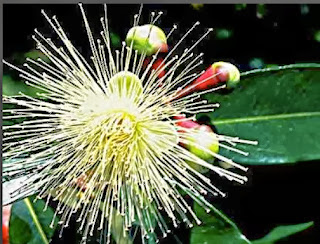 a nationally board certified Chinese Herbalist, and a Registered Herbalist with the American Herbalists Guild.
Lisl is also a certified Medicinal Aromatherapist, a Reiki Master an Acupressurist,
an Auriculotherapist, a photographer, a renowned diagnostician, a teacher and a published writer who has enjoyed a successful private practice for fifteen years.
Please call 8 6 0 - 4 8 0 - 0 1 1 5 or email HerbaLisl@hotmail.com  if you have any questions, would like to schedule an appointment or are interested in participating in classes, workshops or retreats.
Posted by Herbalisl at 9:02 PM