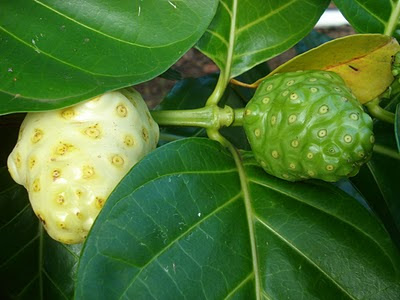 Morinda citrifolia, a member of the coffee family (Rubiacea) is a small tree that can grow up to 30 feet tall with large, shiny green and simple, deeply veined leaves. The tree will flower throughout the year, and mature in about 18 months to produce a multiple fruit that appears as an individual (like a pineapple). The fruit itself is ovoid and turns from green to a translucent white when fully ripe; a mature tree can produce up to eighteen pounds of this seedy fruit yearly.

A celebrity herbal remedy that has generated much interest in the recent past, Noni was Introduced either by ancient Polynesians or carried by ocean currents, or perhaps both. This non-invasive tree is found in many low-lying tropical primary forests and can adapt to a wide variety of harsh conditions from drought to rainforest, heavy shade to full sun, and tolerate saline and lava alike. Many botanists believe that if necessary, the noni would be able to self-pollinate; truly this is a most self-sufficient, pioneering plant!

Although noni was considered a staple food in some Pacific Island nations, it was mostly considered a “starvation fruit” to be consumed only during famine. In some cultures, the seeds were roasted and eaten, but the consumption of “cheesefruit” itself was limited to only a few communities.  The dried fruit powder contains about 70% carbohydrates and approximately 30% dietary fiber with 5% protein and a small amount of fat. It also contains a significant amount of potassium, iron and vitamin A, as well as a fair amount of vitamin C, but still only half the amount as that of an orange.

The noni has several names, depending upon the region of Polynesia you’re in, such as great morinda, Indian (or beach) Mulberry, nuna’ akai, dog dumpling, and mengkudu.  Noni is considered one of the most important medicinal plants in all of Polynesia, and its uses are as adaptable as its tenacious ability to survive. Noni’s modern commercial appeal is quite different than its historical applications; in traditional Polynesian cultures, the most utilized part of the plant was not the ripe fruit, as is popular today, but the green fruit, the leaves and the root bark.

Some traditional cultures actually identify three varieties of noni; one has small leaves, many small fruits and its bark and roots produce a dye for fabric, another exhibits the well-known putrid odor and is mainly used by herbal laypersons for juice while a third variety produces fruit with little or no odor and displays long, strap-like and highly medicinal leaves. These leaves make a very effective bandage; when heated, the leaf will stick to itself and its anti-septic and healing properties make it ideal for dressing all types of wounds. If macerated, the herb can also be applied as a paste or poultice to the site of injury to reduce inflammation and prevent or draw out infection.

Particularly of note are the traditional uses of ‘ura in the Rotuma region of Fiji where poultices are often utilized, sometimes with the addition of sea salt, coconut oil or other herbs, for fungal infections and the fast relief of painful stonefish stings. Midwives also have a method of preparing noni with coconut oil and curcuma to be applied as a paste to the new mother’s body which supports post-partum health; to promote lactation, young leaves are heated and applied to the breast while prayers are offered to the gods Ku and Hina.

Internally, the juice of the fruit may be combined with sugarcane syrup and the very oily kukui nut to make a powerful purgative and blood purifier. Another preparation, sometimes called aumiki’awa, includes red clay and is used for Tuberculosis, however the name of this formula also describes a different preparation that is used for hangovers… another handy remedy!
Generally, preparation of the ripe noni fruit involves a fermentation process sometimes called pake; the ripe fruit is placed in a jar, covered with spring water and left in the sun for three weeks followed by a week in the shade. The potent and unpleasantly fragrant brew is strained, refrigerated and taken in two ounce doses up to three times daily. Some home herbalists will puree the ripe noni and take little shots of it daily to help control diabetes. There is some debate about whether the ancient uses of noni included these fermented brews, as there is little evidence to support such preparations; it is assumed that this is more of a modern application of the herb, utilized by younger herbalists.

The young green fruit is also applied externally for bites, stings, oral ulcers and skin infections; it is quite effective in the treatment of staph (Staphylococcus aureus), a current concern on the Hawaiian Islands. Internal uses of the unripe fruit include the relief of menstrual cramps, arthritis, gastric ulcer and indigestion; the ripe fruit is popular for the treatment of a myriad of diseases including malaria and hypertension. The root and inner stem bark are also used for external infections, but is considered extremely abortive if taken internally and shouldn’t be used by pregnant women.

A popular article by Dr. Heinicke of the University of Hawaii, published in a botanical journal sparked much of the current interest in Noni.  The NIH is supporting research on the contemporary uses of noni juice, particularly in the treatment of breast and colon cancer; these phase I studies have been spearheaded by Dr. Brian Issell at the Cancer Research Center of Hawaii. Papa Kaluakaihua, a traditional Hawaiian healer, utilizes noni for these purposes and more, ”I have used noni to help people with cancer, kidney problems, diabetes and tumors… to me, noni is the most important of the herbs used in medicine.”

It is believed that few Kahunas used noni internally in any capacity except for emetics and cathartics until the mid-nineteenth century; historically, its uses externally were therapeutic and mystical. Due to the significant presence of butyric acid, the ripe noni smells like vomit; traditionally its bad odor was indicative of its power against disease-causing malevolent spirits. Some of the ritualistic uses of noni involved applying a salve over the whole body of the afflicted and then burying the patient in the hot sand to purge the toxic influence. Methods that encouraged sweating, massage and the simple application of hot noni leaves all served to extricate malevolent influences and to restore health and vigor. Legend speaks of the Togon god Maui, who was resurrected after his body was covered with noni leaves.

Noni wood contains alkaloids that can be used to stun fish, making it easier to catch dinner. A strong insecticidal hair wash is also made from the strong roots, and octanoic acid in ripe fruits is poisonous to fruit flies, some ant species and cockroaches; this compound is also toxic to honeybees. Another species of ant, the weaver ant, has developed a reciprocal relationship with noni; the insect provides protection against predation while the plant provides a steady supply of food.

Other traditional uses for Morinda citrifolia include a dye for batik made from the roots (yellow) or the bark (brownish maroon); the anthraquinones in the dye are also highly effective for the treatment of intestinal worms. The fibrous bark can also be pounded into a type of felt to be made into fabric. An ancient Hawaiian chant describes a taunt from the pig god Ku to the fire goddess Pele referring to the process of cloth and dye making:

I have come now from Puna.
I have seen the women gathering noni,
Scratching noni,
Pounding noni,
Marking with noni.

Noni has proven its adaptability and value throughout Polynesia in both ancient and modern times. The tree has managed to convince humans to help it colonize new territory; Europeans have introduced noni to other tropical regions including Puerto Rico, Florida and the US Virgin Islands. In areas where it has become naturalized, noni offers many benefits for agriculture; it provides windbreaks, supports vining crops, gives shade to coffee plants and prevents soil erosion. It’s likely that noni’s widespread use will continue to thrive and new applications for this diverse plant are still to be discovered.

Lisl Meredith Huebner, Dipl.CH (NCCAOM), RH (AHG), “HerbaLisl” is a Registered Professional Clinical Herbalist with the American Herbalists Guild, and a Nationally Board Certified Chinese Herbalist with the NCCAOM (the same board that regulates licensure for acupuncturists throughout the US). In addition, she is a certified practitioner and teacher of Auriculotherapy, Medicinal Aromatherapy and Chinese & Western Herbal Medicine. Lisl is a Reiki Master who utilizes other energy techniques such as Acupressure, Therapeutic Systematic Realignment (TSR), Taoist breathing techniques, toning, vibration and works with stones and crystals; she incorporates spiritual counseling, dietary wisdom and meditation/visualization into her deeply informative and revealing sessions. A renowned diagnostician, teacher and published writer in private practice for over a decade, she continues to develop her knowledge of botanical medicine, agriculture, elemental medicine and shamanism. Lisl is joyfully committed to assisting others on their journey of self-enlightenment through the wisdom of Gaia.
Please call 8 6 0 - 4 8 0 - 0 1 1 5 or email HerbaLisl@hotmail.com

Posted by Herbalisl at 3:38 AM