Angelica: She is Royalty 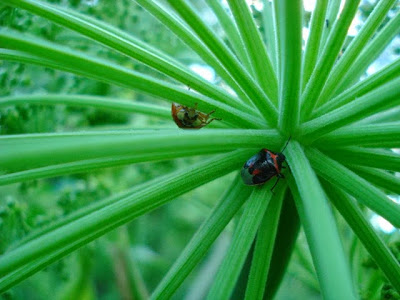 When you come upon a mature Angelica in flower, you will feel it deep within your soul. She is a queen: magnificent, glorious, elegant and stately. Growing from six to nine feet in height, she will hold court in your garden while every favorable insect within 5 miles will seek out her enormous globe shaped flowers to pollinate. Her flower umbels are her crown and she wears them with pride; her gown, a full skirt of large green foliage that sweeps the ground. Angelica’s stalk can be several inches around, giving the appearance of permanence, strength and power…but her stalk, however solid it may appear, is hollow; that is the essence of her spirit’s medicine. 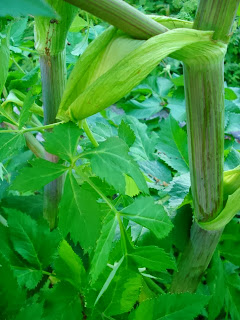 Her stalks create a tube from her base to her crown, and if you take the time to be still in her presence, you will feel that tube within your own body become filled with her energy. Many times I have brought my clients out to our resident Angelica in order to receive her strength and every time their experience was described in similar terms. “I felt like the hollowness inside me was finally being filled up.” “I became intensely aware of my grief and loss, and then felt a soothing presence, a balm to my soul.” “I feel rooted, strong and powerful. I can stand in my space and hold it with loving compassion.”

Hollow stalks, from the perspective of plant spirit medicine, are a signature for some of the plants that assist with journeys to other planes of existence. Angelica’s association with angelic realms is apparent in her name and she has been closely linked to Archangel Michael for centuries. Legend states that during the time of the Plague, an Archangel appeared with the message that Angelica would help to ward off the illness. Over the course of time, people have continued to draw upon her authority to dispel evil spirits or “bad vibes.”

Angelica has been one of the most important herbs utilized worldwide throughout history. The genus Angelica consists of several species used medicinally: Angelica archangelica, imported from Europe and usually cultivated; A. atropurpurea, native to the eastern US; A. sylvestris, its wild European cousin, A. glauca, popular in India’s Ayurvedic tradition; and A. sinensis, commonly known as the important Chinese herb, Dang Gui. The Chinese and Ayurvedic varieties have much more tonifying qualities than their western relatives, but all are considered warming, stimulating and transformative, as well as potentially causing photosensivity.

The varieties of Angelica that were made the most famous throughout Asia and India are beneficial to the Blood and nourishing to the Yin. The Ayurvedic herb “Choraka” and the Chinese herb “Dang Gui” are considered to be female tonics used to regulate the menses, restore the body to balance post-partum, ease the transition through menopause and to build Blood if there is anemia. The dense “head” of the root is more Blood building, while the root “tails” are more effective for moving the Blood.

Angelica sinensis is found in a vast number of Traditional Chinese formulas that affect the Blood; whether for trauma and injury or female reproductive imbalances, Dang Gui is rarely used outside the context of a carefully constructed formula. Although it is occasionally an ingredient in some remedies prescribed during pregnancy, like all Angelicas, its strong blood stimulating effects makes it absolutely contraindicated during pregnancy, unless under the alert supervision of a qualified practitioner.

Classified as pungent, warm, bitter-sweet, Angelica archangelica is a wonderful carminative that dispels gas, bloating and colic. Transformative properties make her helpful for many mucolytic conditions and congestion. She “opens the pipes” for respiratory ailments, such as wheezing, asthma, chronic colds and coughs. Those with vascular stagnation can also profit from the regular use of Angelica, as she can help move and circulate blood to the periphery, easing rheumatic and arthritic complaints.

Diaphoresis, used judiciously in the presence of a pathogen can help protect the body from attack; sweating was once used universally to cure disease during the early stages of pathogenic invasions. Being diaphoretic, Angelica possesses the ability to push a pathogen out of the body through the pores and to defend against contagions. It’s no small wonder that she was such a valuable asset during the time of the plague.

The Angelica essence used in medicinal-grade aromatherapy is also warming and stimulating to the body while relaxing to the mind. Her application helps to increase the production of white blood cells, balance the hormones and calm spasms. A few drops can make all the difference when a migraine headache begins! The Angelica essential oil that I am blessed to be using has facilitated the profound connection I now share with the spirit of this heavenly herb.

Angelica has a warm, aromatic and rich fragrance and its flavor has notes of Juniper, Fennel, Parsley and Pepper. As a culinary herb, the stems of Angelica are candied and applied as a stylish decoration to cakes and pastries. Her seeds add a unique spiciness to the flavor of baked goods, meats, and liquors; her distinctive and pungent taste is found in vermouth and coupled with Juniper berries for making gin. Angelica is actually the secret ingredient used to flavor muscatel grapes in some wines and continues to be a popular cultivar throughout France. 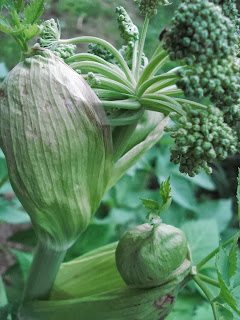 Typically classified as a biennial (meaning that the flowering stalk appears in its second year of growth), Angelica is anything but typical, as you will come to realize if you cultivate a relationship with her. When Angelica finally gathers the strength enough to flower, her tightly curled flower heads begin to emerge from the dense bush of foliage she has created. As the protective sheath wrapping the burgeoning treasure start to unfurl, each flower bud of the umbel seems to enthusiastically release itself from the constraints of her leafy vestments and rejoice at newly found freedom.

As you develop your relationship with Angelica, you too will feel like shedding your old worn-out emotional garments and shine wholly from a place of personal sovereignty. You will come to rule yourself with ease and confidence, and your poise will attract the people and situations that are beneficial to your path. This is Angelica’s gift to you.