Ginkgo: More Than A Memory 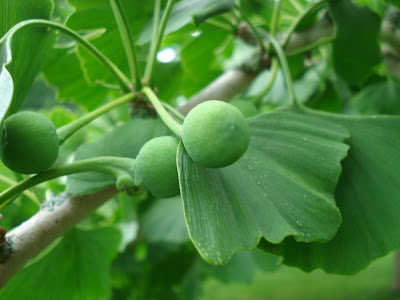 Almost everyone has heard about Ginkgo’s ability to improve memory, but this beautiful tree has a long history of medicinal and epicurean use. In fact, the Ginkgo predates human existence on this planet; it is a living fossil. The species that we know today has been in existence for 160 million years! During the last Ice Age, it was very nearly extinct, but somehow a few of these magnificent creatures managed to survive in Eastern China. Thousands of years ago, Taoist and Buddhist monks, expert gardeners and finely tuned to the natural environment, recognized the power of Ginkgo biloba and planted them on their temple grounds. These revered trees were tended lovingly at their sacred sites so that the species, already rare, would not be lost forever. These monks saved the life of the Ginkgo.

China introduced the Ginkgo to its neighbors in Japan and Korea, where it was adopted and treasured as well; the Ginkgo thrived throughout Asia. In 1712, European scientists “rediscovered” the Maidenhair tree in China after believing that it had died out long before. In their excitement, trees were cultivated widely and Ginkgo became quite popular all over Western Europe. Its hardiness is evident when one pauses to consider this amazing fact: the atom bomb dropped on Hiroshima in 1945 decimated all life except for four Ginkgo trees, one of which was located only .7 miles from the epicenter of the blast. All four of those trees blossomed as usual the following spring, and ever since these particular Ginkgos have been considered especially sacred, representing hope, indomitable spirit and World Peace. Today there are still many trees in Japan that are over one thousand years old and many elder trees exist in Korea including the famous “Snake Tree” in Seoul.

Its strength, tenacity and dignity are indicative of its power as a medicinal, particularly for the elderly. The leaves of the Ginkgo have recently come into vogue as the latest and greatest “fad” remedy for the treatment of dementia and Alzheimer’s. The leaves of the Ginkgo contain Ginkgolides, an allergy-controlling compound unique to this “time-traveler,” and what has been classified as a Platelet Activating Factor (PAF), which inhibits blood cells from sticking to each other, thereby improving circulation. In particular, micro-circulation and circulation to the brain is enhanced which increases cognition, memory and focus. Improved circulation to the head has other benefits as well: hearing, eye dis-ease, tinnitus, vertigo, senility, mood and social ability have all been shown to benefit from the use of Ginkgo supplementation. This blood moving effect applies to the rest of the body too; arthritis, rheumatism, peripheral blood circulation, varicosities, leg cramps and various pains have shown marked improvement in various studies of Ginkgo leaf. It is also helpful as a uterine stimulant and for the treatment of arteriosclerosis: it increases coronary and capillary circulation, lowers cholesterol, relieves chest pain and pressure, disperses clots and is a powerful antioxidant.

When preparing remedies from the raw herb, gather the leaves in autumn as they begin to turn, otherwise they are too tannic to use. Ginkgo should be decocted for no longer than twenty minutes; the leaves can also be tinctured for longer storage. To prepare the nuts in a decoction, keeping the shell on will balance the mild toxicity of the seed. Ginkgo is available in all health food stores; most research has been conducted on preparations containing a 24% concentrated leaf extract taken at a 40mg dose, three times daily for a minimum of 3 months. It is not recommended that Ginkgo be used in high doses or long-term, it is powerful and must be respected

The Ginkgo speaks of endurance and long life, it is beset by no disease or insect, for any that may once have plagued her, have long been extinct. It grows slowly and takes three human generations to mature, but can attain the height of 100 feet and its trunk can reach three feet in diameter. The leaves are unusual; they form a ribbed fan shape, notched in the middle. This shape reveals its origins long ago when it diverged from the conifers and its needles fused together to become a leaf. The tree divides itself into two sexes, the male has barely noticeable flowers that appear in early spring, and the female produces a small apricot-colored fruit in the fall. The fruit is somewhat toxic and foul-smelling, but beneath its putrid flesh is a valued treasure: the ginkgo nut.

The ginkgo nut has been used medicinally in China for thousands of years for the treatment of lung disorders and “Damp” conditions (as classified in Traditional Chinese Medicine). Ginkgo has the ability to dilate the bronchia and blood vessels and is used for coughs with easily expectorated thick phlegm, asthma and wheezing. It is also used for other “Damp” type conditions such as urinary problems with turbidity, incontinence and/or frequent urination. Ginkgo nuts are antifungal and antibacterial, considered to be somewhat astringent, slightly sedative and are a frequent addition to TCM formulas treating urinary and bronchial ailments as well as dis-eases of the reproductive organs.

Considered a delicacy for thousands of years, the ginkgo nut remains today a sought after treat that is rarely found in stores or on restaurant menus…they are immediately gobbled up by those lucky enough to have laid claim to a nearby female Ginkgo tree! In the fall, the most opportune time to gather the ripe fruit is right after a storm knocks most of them to the ground. Arrive early, as you may find that you have some stiff competition from other Ginkgo nut lovers! Since the flesh of the fruit has a scent similar to vomit and causes dermatitis in about one out of fifty people, it is best to clean the nuts with a pair of gloves on, right at the base of the tree. Prepare them as soon as possible, they won’t last more than a few days in the refrigerator, but once they are cooked they can be preserved by freezing. They should be roasted in their shell –stirred occasionally- in a 275 oven for twenty-five minutes before enjoying. Low in fat and high in protein, ginkgo nuts are rich, tender, savory and delicious when prepared properly. Very rarely, adverse reactions such as headache or digestive disturbance have resulted when too many Ginkgo nuts are consumed, so use restraint and don’t gorge yourself on them.

The famous German poet Goethe wrote this heart-felt tribute to Ginkgo which links the hollowed tree with the harmonious philosophy of Taoism:

This leaf from a tree in the East,
Which has been entrusted to my garden,
Reveals a secret meaning,
Which pleases those who know.

Is it one living creature
Which has divided itself?
Or are these two, which have decided,
That they should be as one?

To reply to such a question, I found the right answer:
Don’t you feel in my songs and verses
That I am One and Two? 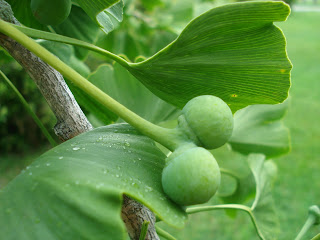 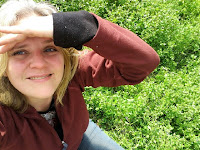 Lisl Meredith Huebner, Dipl.CH (NCCAOM), RH (AHG) is a nationally board certified Chinese Herbalist, and a Registered Herbalist with the American Herbalists Guild. Lisl is also a certified Medicinal Aromatherapist, a Master Reiki practitioner, an Acupressurist, an Auriculotherapist, a photographer, a renowned diagnostician, a teacher and a published writer in private practice for over twenty years. She is available by appointment. HerbaLisl.com
Please call 8 6 0 - 4 8 0 - 0 1 1 5 or email LislMeredith@hotmail.com if you have any questions, would like to schedule an appointment, attend meditations, weed walks, or are interested in taking classes.
Posted by Herbalisl at 7:45 PM